According to a recent report from the Government Accountability Office, it takes the Occupational Safety and Health Administration more than seven years on average to write a new workplace safety rule. Some rules take nearly two decades to finalize. “The process for setting safety standards at OSHA is broken,” said Senate Health, Education, Labor and Pensions Committee Chairman Tom Harkin (D-IA). “Even when the evidence is undeniable that our workers are dying from workplace hazards, OSHA still takes an eternity to issue a new safety rule. While reasonable safety rules are delayed to provide never-ending opportunities for stakeholder input, workers’ lives and livelihood are at risk.”

This post originally appeared in ThinkProgress on April 24, 2012. Reprinted with permission.

Ha ha ha. Remember the joke the Republicans like to tell about how the Obama administration is passing an intolerable number of regulations and the economy just can’t take that kind of regulation-passing? 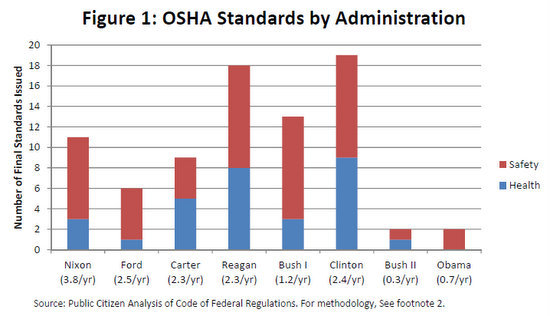 Granted, the Occupational Safety and Health Administration isn’t the only government agency responsible for regulation, but a new report from Public Citizen (PDF) demonstrates the barriers to workplace health and safety regulation that have been increasing for decades, driving OSHA’s ability to pass new regulations down into the basement. How bad is the situation? “While OSHA has only regulated two chemicals since 1997, industry develops two new chemicals every day.”

The delays, which are created by a combination of legislative, executive, and judicial pressures, have real consequences:

Five pending OSHA standards have been subject to delays ranging from 4 to 31 years. Analyzing OSHA’s risk assessment data, we found that eliminating the delays would have prevented more than 100,000 serious injuries, more than 10,000 cases of occupational illness and hundreds of worker fatalities.

For instance, remember diacetyl? That’s the butter flavoring chemical found in microwave popcorn. It was identified by the CDC as a hazard in 2002. It made headlines in 2007,ConAgra stopped using it, and that September, the House even passed a bill calling for OSHA to declare it a hazard. But, the Public Citizen report says, “OSHA took no further action on diacetyl during the remainder of the Bush administration.” In early 2009, OSHA started moving forward on a regulation. But between requirements that “small business” (where small = up to 500 employees) be consulted and requirements for intense cost-benefit analysis, they still may be “years away” from regulating diacetyl.

That’s how oppressive the burden of safety and health regulation is on business—businesses have to worry that someday, after they’ve had extensive input, their use of a butter-flavored chemical that kills people may be regulated.

This post originally appeared in Daily Kos Labor on October 5, 2011. Reprinted with permission.